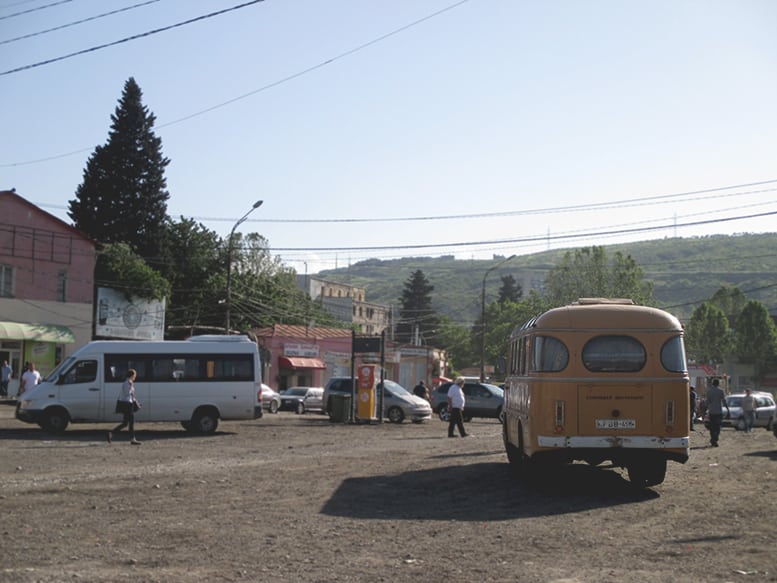 This ancient town lies at the main road that connects Gori (birthplace of the Soviet leader Joseph Stalin) with Tbilisi.

If you want to visit Mtskheta, I suggest you to use public transport (minibus “marshrutka”), that is quite convenient and inexpensive. The cost to Mtskheta is only 1 GEL (0.43 USD) per person/one way.

How to get from Tbilisi to Mtskheta

Take the metro and reach Didube metro station (just a few stops from the center). Station names are announced in both Georgian and English.

Leave the subway car and go with the crowd. Within a few moments you’re in a dark underpass where people sell clothes, fruit, vegetables and the like. Go straight ahead out of the underpass.

Continue walking until you see on the left hand a small ticket booth with a sign “cash desk”. Walk over to the window and ask the clerk for a ticket to Mtskheta. She will give you a ticket and show marshrutka which goes to the direction of Mtskheta. Sit inside and wait for marshrutka to fill up (sometimes it can take a bit longer).

The second option is to ask local people. In any case, do not worry, most locals know which bus goes to Mtskheta and they will direct you in the right direction.

The best place where you can get off the marshrutka is opposite the small shop, which is on the right hand, or better yet, tell the driver at Didube Bus Station or after 15 minutes of ride that you want to leave the bus near the city center. He will stop wherever you want.

The bus continues north from the center, so be prepared when you see the sign Mtskheta.

How to get to Tbilisi from Mtskheta

There are two ways to get back to Tbilisi. The first way is to stand up to the road (on the opposite side of the road from where you had alighted in town), wait until you see marhrutka and wave your hand to the approaching bus.

Inscriptions in marshrutkas are written in the Georgian script, therefore it is good to remember that Tbilisi contains 3x letter i, so Georgian inscription will also contain the same three letters იიი (Tbilisi = თბილისი). Once the bus stop, ask the driver if the bus goes to Tbilisi. If not, wait for the next one.

The second way is to go to the north of the city near the Samtavro Monastery and find a small crowd of people who most likely will go to Tbilisi, or better yet, ask them. Not many people in Georgia speak English, however, if you just say Tbilisi or Tbilisi bus, everyone will understand what you mean.

Marshrutkas run very frequently in both directions and the journey takes about 20-30 minutes. The fare from Mtskheta to Tbilisi is paid when you got off the bus at Didube Bus Station. On the way to Mtskheta from Didube station (Tbilisi), you must purchase a ticket at the small booth.

This journey is very comfortable and much cheaper than a taxi, however, marshrutkas typically leave when full or partially full, so always set 10-20 minutes aside.